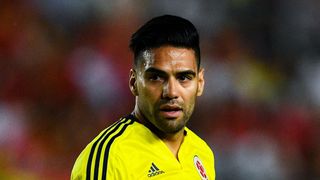 Radamel Falcao denied Brazil a 10th consecutive World Cup qualifying win and grabbed a vital 1-1 draw for Colombia in their own quest to reach Russia 2018.

Brazil's place in the finals is secure as group winners after dominating the notoriously unforgiving CONMEBOL section under the guidance of head coach Tite, and they looked set to continue their march when Willian magnificently opened the scoring on the stroke of half-time.

Colombia went into the game at the head of devilishly congested chasing pack and seasoned striker Falcao brought his prolific Monaco form to a raucous Estadio Metropolitano in Barranquilla.

Jose Pekerman's men now have 26 points, only three more than Argentina in fifth, but Chile's defeat in Bolivia guarantees they will enter next month's concluding qualifiers against Paraguay and Peru in one of the four automatic qualification places.

Falcao has seven goals in four Ligue 1 games so far this season and the second-half header by Colombia's all-time record goalscorer was excellently dispatched.

Another man tussling for top honours in France this year, Neymar, was unable to similarly get on the scoresheet despite an inventive, all-action showing.

Torrents of boos greeted Brazil whenever they enjoyed early possession but Paulinho almost smuggled home an opener at the far post from Dani Alves' deep cross after Neymar initiated a fourth-minute counter attack.

Felipe Luis clattering through Juan Cuadrado did little to endear the Brazil left-back to the home faithful, while Alves was on the end of similarly robust treatment from Colombia winger Edwin Cardona as the contest threatened to boil over.

Play restarted from the latter stoppage with a Brazil corner and Cardona made a nuisance of himself once again – blocking on the line when Fernandinho prodded goalwards.

James finally gave Brazil goalkeeper Allison some work to do at his near post as the half ticked past its halfway point, although he did not make a clean contact on the end of Cardona's fine reverse pass.

After a hydration break, Neymar tore at the Colombia backline and Roberto Firmino scuffed his shot towards the bottom right corner, forcing David Ospina to tip to safety.

Neymar was made to wait to take a corner as a dog entered the field and was reluctant to leave – moving the match into first-half stoppage time, when Brazil spectacularly took the lead.

The set-piece was cleared by Colombia but the ball was lifted back towards goal, Neymar's volleyed lay-off sat up invitingly for Willian and the Chelsea winger brilliantly thrashed into the top corner from the edge of the area.

Pekerman's decision to replace Cuadrado with Yimmi Chara did little to initially increase Colombia's threat in the second half but they pulled level through a familiar source in the 56th minute.

Right-back Santiago Arias whipped in a fine ball from the right and Falcao escaped Silva's attentions and expertly steered a header into the far corner.

The stadium erupted and Colombia were transformed – Cardona sending a piledriver into the chest of Allison, who was caught out by James free-kick from the left but spared by his near post.

Firmino was replaced by Gabriel Jesus as Brazil looked to reassert their authority and Neymar blasted wide inside the final 15 minutes.

A sprawling Fernandinho deflected James' curling strike over in the 81st minute and there was no finish to match a dazzling Neymar dribble in response.

The world's most expensive player then flung himself  into a headed back-post attempt but the goal to reward his endeavours did not arrive.