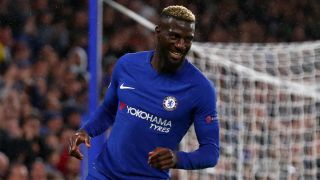 Antonio Conte has challenged Tiemoue Bakayoko to improve tactically and get better on the ball if he is to become "complete" like Chelsea and France team-mate N'Golo Kante.

Bakayoko has started two of the Premier League champions' four top-flight games so far in 2017-18 after signing from Monaco for am estimated £40million in July and scored his first goal for the club as a substitute in the 6-0 Champions League win over Qarabag on Tuesday.

The Chelsea boss outlined a number of areas where the midfielder still needs to develop, but hopes the progress shown by Kante can inspire him.

Conte feels Kante's improvement in possession since arriving at Stamford Bridge at the start of last season has eliminated his only weakness and is optimistic Bakayoko will reach a similar level in time.

"He has a lot of room to improve in the tactical aspect. Also in the physical aspect. He's working very well and he needs a bit more time than other players to understand our style of football very well.

"Above all if you are a midfielder, you need time to understand the right position. We try to play with an identity and if you want to give an identity to your team, every single player needs to know your idea of football very well.

"I'm very happy because he's improving a lot. In the last 10 days he improved a lot in the tactical aspect and physical aspect.

"He's a powerful player, for sure a good signing for us. To have a powerful player in your team is very important, above all in this league. This league is very tough physically. If you are not prepared for this impact you can suffer a lot.

"For sure I'd like to play with him. Now it's impossible. Not now. I think he's very close to being totally involved in our idea of football. He can improve a lot with the ball. We are working about this aspect."

On the development of Kante, he added: "We did the same with N'Golo when he arrived here. If you remember he was very, very good without the ball, to win the ball, to recover the ball.

"Now I think you can see a complete player with the ball [and] without the ball. Now he's becoming better with the ball, N'Golo. We want to work in the same way to have this process with Baka. This will be very important for him and for the team.

"I said many times about N'Golo last season that he could improve a lot with the ball. I think he's working very hard to improve this weakness. But I think now he's a complete player, he's a top player. He always knows when he has the ball what he has to do. This is very important.

"Baka without the ball is a really strong player, a physical player. You can feel him during the game. I think he can improve a lot with the ball."