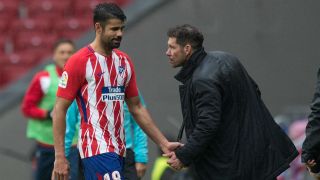 The striker's first LaLiga appearance since rejoining Atleti from Chelsea was an eventful one, with Costa scoring his side's second goal in the 2-0 win at the Wanda Metropolitano before picking up a second yellow card for celebrating among the home fans.

Simeone felt the referee had little option given Costa broke competition rules but was eager to highlight the positive impact of his performance in a tempestuous encounter in the capital.

"I focus on the good things Costa did," he said. "The referee can't interpret the emotional side of things. The rule is what it is, but scoring the goal was the important thing.

"The sending-off is fine because he goes to celebrate with the fans and you have to accept the rules of the game.

"We keep going in the same way, with a stronger attacking threat because Costa boosts the attack and Vitolo will do the same with his transition play."

Angel Correa, who broke the deadlock with a fine finish in the first half, admitted he did not know Costa's celebration would see him punished.

"I didn't know it was a booking to celebrate a goal in the stands," he told beIN SPORTS.

"It's a shame because he's important for us."

Atleti's win takes them to within six points of leaders Barcelona, who play their game in hand against Levante on Sunday.