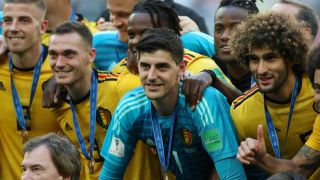 Courtois helped the Red Devils to a third-place finish at Russia 2018, keeping his third clean sheet of the competition in Saturday's 2-0 win over England in St Petersburg.

The 26-year-old is into the final 12 months of his contract at Chelsea and has long been a reported target for Real Madrid, with his former partner and two children living in the Spanish capital.

A reported £200,000 per-week offer remains unsigned and, as the Maurizio Sarri era gets underway, Courtois hinted the Blues might have to up their proposed terms.

"I will be coming back, for sure, and I will see what they want [to do] and how they say it," he told reporters.

"Obviously with this World Cup, I think what was on the table obviously is different than what I can have, maybe."

Happy with the win and the clean sheet! Great tournament of all the team! Proud to achieve what we did with this team, we will go for more! #1   July 14, 2018

Eden Hazard, Courtois' team-mate for club and country, has also been touted for a move to Madrid – speculation the forward did nothing to temper with his post-match comments following the England game.

"Wherever I go, Eden must come along," Courtois joked. "We will not let each other go. But first, a vacation."

After that he is set to begin work under former Napoli boss Sarri, but expressed surprise that the open secret of the Italian being in line to replace countryman Antonio Conte in west London had taken so long to become reality.

"The decision that was made a few days ago, I think as a group we expected that to happen a longer time ago because we heard what the board said to us already after the season," Courtois added.

"Then it takes until now [to happen]. I don't think it's easy for a new manager to come in and shape us in a few weeks.

"I think the fans need to understand we will need some time to adapt to the new manager and a different style.

"I know Dries Mertens [Belgium's Napoli forward] and he told me really [good things] about Sarri, so I'm looking forward to come back and win some prizes."