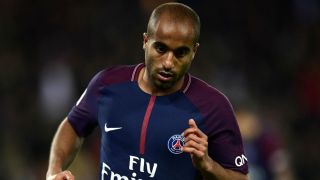 Few countries can boast a romantic association with football quite like Brazil, the supposed spiritual home of 'Jogo Bonito' and producer of some of the greatest players ever.

But Brazil's record in terms of exports to have graced the Premier League is rather hit and miss.

Lucas Moura is the next Brazilian to head to English shores, joining Tottenham from Paris-Saint Germain, where he became a victim of their numerous attacking options.

The 25-year-old has all the attributes to suggest he will be a hit in England, possessing explosive pace, attractive dribbling skills and an eye for goal.

But talent alone will not be enough, as we examine some of the Brazilians who have starred and flopped in England before Lucas.

Club chiefs at Inter will have been plunging their heads into their hands at the start of January when Barcelona agreed a deal to potentially pay Liverpool £142m for Coutinho. The tricky playmaker joined the Reds for just £8.5m five years earlier, with Inter not putting up much of a fight for him. He went on to enjoy a stellar stay in England, becoming one of the Premier League's leading lights and is now tasked with helping others fill the Neymar void in Camp Nou.

Despite being tracked by a host of major European clubs, Middlesbrough pulled off something of a coup in signing Juninho - then 22 - from Sao Paulo in 1995, spending just under £5million on him. He enjoyed two brilliant years on Teeside before joining Atletico Madrid and he later returned to Boro for a second two-year spell in 2002. Regarded by many supporters as the greatest player in the club's history, 'The Little Fella' - who was part of Brazil's World Cup-winning squad in 2002 - remains a Middlesbrough icon.

Quick, skilful and hard-working, Willian has been a hit in the Premier League since joining Chelsea from Anzhi Makhachkala in August 2013. In the last two years he has had to contend with being more of a rotation option, but the fact he has remained a potent weapon despite not starting consistently is testament to his professionalism and ability. He could perhaps play more regularly elsewhere, but there can be little doubt that he has been a success at Chelsea.

. thinks 's goal against Brighton was one of the best of the season! Who agrees with him? January 22, 2018

After impressing in Brazil's World Cup-winning campaign in 2002, Gilberto moved to Arsenal, where he enjoyed a fine six-year spell. Although it was said he struggled to settle in the area initially, on the pitch he looked at home in the Premier League and became a key figure very quickly, with the Gunners going unbeaten in his second season. Injuries interrupted his stay at times and he fell out of favour towards the end, but he did an impressive job at the heart of Arsenal's midfield for several years before leaving for Panathinaikos.

Initially signed as an attacking midfielder, Firmino has developed into one of the most effective forwards in the Premier League. On the pitch he has formed strong connections with his attacking colleagues and made an excellent contribution in terms of goals and assists. Firmino is key part of Jurgen Klopp's side and looks set to play a central role for Brazil at the 2018 World Cup.

Having impressed with Heerenveen in the Eredivisie, scoring 45 times in 39 league games, Alves became Middlesbrough's record signing for a reported £15m. However, the Dutch top flight does not necessarily give an accurate barometer of a player's ability and, sadly for Boro, Alves turned out to be more of a Mateja Kezman than a Ruud van Nistelrooy. After scoring six in his first 11 Premier League games, he managed only four - three coming in an 8-1 win over Manchester City in his final match - in 31 appearances in his only full season there, as Boro were relegated.

Paulinho arrived at Tottenham in 2013 with a reputation as a goal-scoring box-to-box midfielder, but he ultimately had very little impact at White Hart Lane. Luckily for Spurs, the developing financial power of the Chinese Super League allowed them to recoup much of the money they spent on him and he went on to impress enough in China for Barcelona to deem him worthy of a reported €40m investment. That certainly turned heads among Spurs fans, but he does look rather more suited to life in Spain than the Premier League.

, together with president , has now signed his contract with FC Barcelona August 17, 2017

After emerging as a real prospect with CSKA Moscow in Russia, Jo's big move came in 2008 when he joined Man City for a reported £19m, a club record at the time. Then-City manager Mark Hughes called the signing a "coup", but he will probably be regarded as one of their worst signings in recent history. In just under three years, he scored a single Premier League goal in 21 appearances and also spent loan spells at Everton and Galatasaray, having little impact at either. He has since gone on to have a reasonable enough career, but his reputation in England could not be much lower.

Luiz Felipe Scolari lauded Kleberson as a vital part of Brazil's World Cup win in 2002 and a year later he got his big break, as Manchester United came calling. Looking back, his presentation at Old Trafford alongside Cristiano Ronaldo provides a poignant memory, with the two players' careers going off in entirely contrasting directions thereafter. Kleberson failed to adapt to English football, struggling greatly to be the Juan Sebastian Veron replacement he had been dubbed. After just 20 Premier League appearances, United cut their losses with Kleberson and offloaded him to Besiktas. Ronaldo has since gone on to win five Ballons d'Or.

In Turkey with Fenerbahce, Andre Santos earned rave reviews as an attack-minded left-back who offered plenty in the final third. However, after joining Arsenal, he struggled to bring those strengths to the Premier League and his lack of defensive nous became badly exposed. He arrived shortly after the Gunners' 8-2 mauling by Manchester United, but he did not offer much of an improvement. Santos made just 13 league appearances in a little over 18 months in London, before being sent back to Brazil.

And the manager hopes Andre Santos will restore his confidence while on loan at Brazilian side Gremio - February 15, 2013