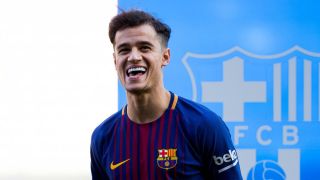 Coutinho's transfer from Liverpool to Barca was completed on January 6, with LaLiga's leaders reportedly paying an initial £106million that could rise to £142m for the Brazil forward's services.

Figo was at Inter when they agreed to sign Coutinho in 2008, though he was loaned back to Vasco da Gama and never played with the Portugal legend at San Siro.

And Figo, who controversially left Barca for Real Madrid in 2000, is pleased the 25-year-old has sealed his dream move to Camp Nou.

Figo, speaking at the Abu Dhabi Invitational 2018, Yas Links Golf Club, Abu Dhabi, told Omnisport: "Football has changed so much, the amounts change so much.

"I'm happy for Coutinho because I met him at Inter, I didn't play with him but he's a nice boy. He deserves to be successful and happy, so I wish him all the best because he deserves it."

Coutinho cannot play for Barca in the Champions League this season having already done so for Liverpool.

Jurgen Klopp's men are one of five Premier League teams through to the knockout stages of Europe's top competition, providing encouragement that an English team could lift the trophy for the first time since 2012.

Figo said of the Premier League's quintet: "In the Champions League they are doing pretty well until now, that shows they have potential, sporting potential, financial potential and of course that helps you to make stronger teams.

"Let's see what happens at the end of the competition but they are doing really well until now."