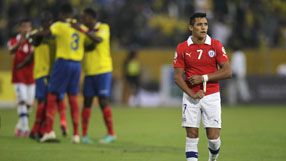 Minus three defenders through suspension after their 3-1 defeat by Ecuador in Quito on Friday, their second loss in a row, Chile have struggled to make their all-out attacking game work and lost their way following a promising start in the South American group.

Away wins in Bolivia and Venezuela in June put Chile top of the nine-nation group, but two bouts of player indiscipline since the qualifiers started a year ago had already undermined coach Claudio Borghi.

On top of that, Argentine Borghi has had to watch the last two defeats from the stands as part of a four-match suspension for insulting the referee during the victory in Venezuela.

A spat with leading club Universidad de Chile in which Borghi dropped several of the side's players over the timing of their release was a poor platform for last month's home match with a resurgent Colombia who won 3-1.

Borghi has hinted at quitting, according to Chilean media reports, and striker Alexis Sanchez has been criticised for his lack of goals.

Chile have dropped to fifth with 12 points, five behind leaders Argentina halfway through the qualifiers. The top four at the end will qualify for the 2014 finals in Brazil with the fifth-placed team meeting an Asian side in a play-off for one more berth.

Defender Pablo Contreras and midfielder Arturo Vidal are suspended after being sent off on Friday and left-back Osvaldo Gonzalez for a second yellow card, although midfielder Gary Medel will be back from suspension.

Argentina, who crushed Copa America holders Uruguay 3-0 in Mendoza across the Andean border with Chile on Friday, travel to Santiago as favourites despite some shaky away form including a lucky 1-1 draw in Peru last month.

"Chile are a good team. But when a team are not on a winning streak and something happens during a match, it's harder to bounce back," said coach Alejandro Sabella.

Chile's penchant for attack and need for points could play into Argentina's hands.

Four years ago, the last time the two teams met in a qualifier in Santiago, the crisis team were Argentina.

Coach Alfio Basile resigned after a 1-0 defeat, the first time Argentina had lost a qualifier to their neighbours, sparking an unstable three-year spell for the twice world champions.

Diego Maradona stepped into the breach and lasted until the 4-0 loss to Germany in the 2010 quarter-finals in South Africa.

Sergio Batista took over but was forced out after quarter-final elimination by Uruguay in the Copa America in Argentina last year.

Sabella took charge 14 months ago and made Messi his captain in a reflection of the decision Carlos Bilardo took with Maradona in 1983.

Argentina have blossomed under Sabella and the increasing influence of Messi, who is joint top scorer with Higuain and Uruguay's Luis Suarez.