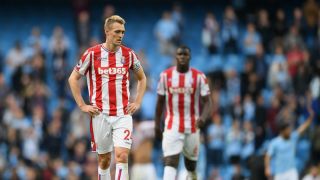 Darren Fletcher is only the eighth outfield player to appear in 100 consecutive Premier League matches after being named in Stoke City's starting XI to face Bournemouth on Saturday.

Fletcher last missed a Premier League game on January 31 2015 when West Brom hosted Tottenham, with the Scot then returning on February 8 as they claimed a 2-2 draw at Burnley.

He featured in 91 successive league games for the Baggies before departing for Stoke in the close-season, and Saturday's game sees him represent Mark Hughes' men for the ninth time in the top flight.

Only seven other outfield players have reached the landmark, with Frank Lampard (164) holding the record since December 2005.

Fletcher's achievement is made even more impressive considering he suffered from numerous health and fitness issues during the final years of his stay at Manchester United.

He is still some way off Brad Friedel's record of 310 consecutive appearances, though.