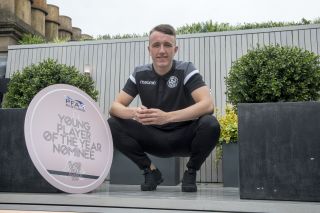 David Turnbull has completed a move from Motherwell to Celtic which breaks the Lanarkshire club’s transfer record.

The 21-year-old midfielder – who has moved for a fee of around £3million – is the latest in a steady stream of players to switch from Fir Park to Parkhead over the years.

Here,  we look at what happened to seven others who took the same route.

Motherwell’s top goalscorer for three consecutive seasons before signing for Celtic for £22,000 in 1965. He was joint-top scorer in the Scottish league with Sir Alex Ferguson, then of Dunfermline, with 31 league goals in his first season. He had netted 36 goals by Christmas in the following all-conquering season for the club but aggravated a knee injury and missed out on the chance to become one of the Lisbon Lions. He could not regain a regular starting place and left for Hibernian in 1968 with a record of 86 goals in 93 appearances.

Deans was a prolific goalscorer at Fir Park, netting 91 goals, and Celtic snapped him up for £17,500 in October 1971. A penalty miss in a European Cup semi-final shoot-out against Inter Milan in 1972 saw Celtic miss out on a third final in six years but he went on to score 132 goals in 184 games including two cup final hat-tricks against Hibernian.

The striker shot to prominence in January 1983 when he hit a hat-trick against Rangers and match-winning double against Celtic in the space of two weeks. His 11-goal return that season saw Celtic sign the then 19-year-old in a £75,000 deal which Motherwell were forced to accept under pressure from their bank. McClair was a huge success, scoring 126 goals in four seasons before moving to Manchester United after winning both of Scotland’s player of the year awards in 1987. He ended up back at Fir Park for a short spell in 1998.

Walker was a stylish striker who played a key role in Motherwell’s 1985 First Division title win before moving in the summer of 1987 for £375,000. He netted 32 goals in his first campaign to finish top scorer in Celtic’s centenary double-winning season. That proved the high point of his Celtic career and he left in 1991, but earned a move back to Parkhead three years later after a successful spell at Bolton.

O’Donnell left for £1.75million, Motherwell’s previous record fee. The midfielder scored in Motherwell’s 1991 Scottish Cup final triumph as a teenager and made almost 150 appearances before signing for his boyhood heroes. Scored a double on his debut against Partick Thistle and won a Scottish Cup in his first season but injuries restricted his impact until he became one of the heroes who stopped Rangers winning 10 titles in a row in 1998. Left for Sheffield Wednesday a year later and was back playing for Motherwell at the time of his tragic death.

The speedy midfielder joined Celtic in a £350,000 deal at the age of 21 in January 2004 and started both legs of a UEFA Cup triumph over Barcelona and the Scottish Cup final that season. Injuries slowed down his progress and he ended up making more substitute appearances than starts before a £600,000 move to Derby in January 2007. Another who ended up back at Fir Park.

The winger made nine first-team appearances for Well before injury issues halted his progress but he refused a new deal and was sold to Celtic for an undisclosed fee in February 2010. His Hoops first-team career consisted of a 13-minute appearance against Ross County in August 2012 with cruciate ligament damage among the injuries that undermined his career, and he stopped playing at 25.