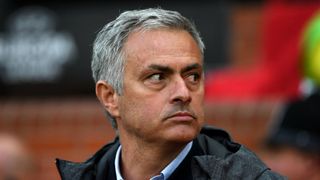 Jose Mourinho says days off at Manchester United are 'a la carte' as the Red Devils boss once again questioned the club's hectic fixture schedule.

United booked their ticket to the Europa League final in Stockholm after a 1-1 draw against Celta Vigo at Old Trafford last week secured a 2-1 aggregate triumph.

However, while final opponents Ajax completed their domestic season on Sunday - a day on which United lost 2-1 at Spurs - Mourinho's men face Southampton at St Mary's Stadium on Wednesday before completing their Premier League season against Crystal Palace three days out from the Europa League showpiece.

The Portuguese admits that the mental pressure of playing so many fixtures in a short space of time is bound to take its toll as he struggles to find time to give his injury-depleted squad days off.

"Guys that played 90 minutes I cannot give a day off if I want them to play versus Southampton, they need two recovering days.

"It's a la carte, and trying to have people be the best they can be. But one day off you are right, sometimes you need a day off and they don't know what a day off is. This is a period in one week I have to give a day off.

The former Chelsea and Real Madrid boss recently claimed that he has never worked harder than he has at United, a point he was keen to elaborate on when previewing the match with Southampton.

"The accumulation of the games, I never had that. In all my career, in Europe, in the group stages I was never out, in the last 16 I was out only once," he added.

"So I reach the semi-finals 10 times, so I go always to the end of the competitions. In the League Cup I normally go far. In domestic cups, I won in Spain, Italy, Portugal, I normally have a lot of matches.

"But like this I never had this situation of you play a final and the game that you should play that day is going to be postponed for the last week, the last week! This is crazy!

"I repeat the same, thank you [to referee] Michael Oliver because we were out of the FA Cup [a quarter-final defeat to Chelsea where Ander Herrera was sent off].

"If we go to the FA Cup semi-final it would be a complete disaster. I don't know when we play the game. On top of that the accumulation of big injuries, not small, hamstring, two or three weeks.

"It's surgery, one knee, another knee, a foot, big surgeries, less players and less players, very difficult, but we are there and we go to the final the best we can."