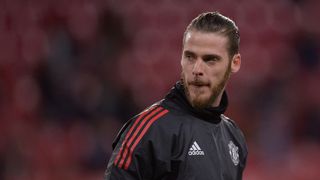 An understated David de Gea was satisfied with an astonishing save he labelled "important" after preserving a 0-0 draw for Manchester United at Sevilla.

Jose Mourinho appeared to set up for a draw at the Ramon Sanchez Pizjuan and he got exactly that, with Sevilla controlling the majority of the contest, but unable to find a way past De Gea.

They came closest through Luis Muriel, who saw a point-blank header pawed over the crossbar shortly before the interval.

De Gea had little interest in revelling in his spectacular intervention, admitting that Vincenzo Montella's side perhaps deserved more.

He told BT Sport: "It was at the last minute of the first half so it was an important moment of the game.

"I made the save. I'm happy for that.

David de Gea to the rescue for Manchester United.Will THAT save prove crucial in the tie? February 21, 2018

"I think they had the best chances of the game. We defended well, but they had control of the ball, they played really well but the result is open and we need to play the second leg at Old Trafford."

United only mustered a solitary shot on target in the game and Chris Smalling also espoused the importance of a second leg on home soil.

"It opened up in the second half," he said. "After the end of that first half, where David made a couple of good saves, they didn't have clear-cut chances but it's in our hands at home and you've got to win at home to go through anyway

"The atmosphere is very good here. It was loud, you can tell it was emotional and we had to dig in at times.

"You could tell they tired in that second half. The last 20 minutes we tried to put pressure on and it was very open.

"But it's a result that [means] we're confident at home."