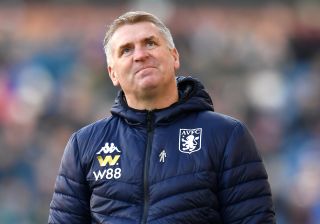 The Magpies welcome Smith’s side to Tyneside on Wednesday with Bruce aiming to secure his first win over Villa since leaving in 2018.

Bruce had a cabbage thrown at him in his final game in charge of Villa – a 3-3 draw with Preston in October 2018 – as tensions reached boiling point at the end of his two-year reign.

He was dismissed and replaced by Smith, who reckons Bruce will have an added incentive to get one over his old club.

“I think whenever you play against one of your former teams, there’s always that extra edge there, so I’m sure Steve would take great pleasure in beating Villa,” Smith said of Bruce, whose side sit 13th in the Premier League despite the distraction of takeover speculation at St James’ Park.

“Number one, because he’s manager of Newcastle and he wants to. Number two, because he used to be manager at Aston Villa.

“But number one will be his biggest driving force, that’s for sure.

“I have a great deal of respect for him and (first-team coach) Stephen Clemence and the jobs they’ve done wherever they’ve been. This will be a tough game for us.”

Villa flew to the north-east on Tuesday, adhering to social distancing rules, having drawn with Sheffield United and lost to Chelsea in their first two games back after the enforced break.

Smith believes his team are now harder to beat than before coronavirus halted sport in March and, while they are yet to enter must-win territory, Villa remain second bottom of the table.

“If we need to win the last game of the season then that’s must-win. At the moment, it’s being hard to beat, showing personality on the ball and being clinical,” Smith added.

“There’s six teams in and around it at the moment. We’re one of the teams trying to get out of it.

“I’ve definitely seen an improvement with our defensive display, despite what others might say.

“We’ve given away 75 per cent of possession but only conceded five or six shots on target against Chelsea. That’s a good defensive display and we’re certainly better at that.

“Against a top team, we’re disappointed that we took the lead and gave it away from there but we will take heart from it.”