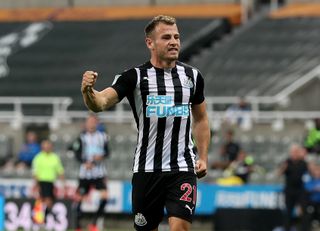 Ryan Fraser fired Newcastle into the third round of the Carabao Cup with a goal on his debut as the Premier League side edged past Sky Bet Championship Blackburn 1-0.

Fraser’s 35th-minute strike was all that separated the sides on a night when the visitors more than made a game of it against a Magpies side featuring 10 changes from the weekend, but crucially could not find a way past goalkeeper Mark Gillespie.

Things might have been very different, however, had midfielder Lewis Holtby hit the target with a 12th-minute effort which flew wide or had they been more precise amid a late flurry.

In the event, one goal was enough for the hosts with head coach Steve Bruce getting minutes into the legs of Fraser, who had not played a competitive game since March 7, as well as defender Ciaran Clark on his return from a seven-month injury lay-off, but not much else.

Perhaps understandably, a Rovers side featuring nine of the men who started at Bournemouth in the league at the weekend produced the more fluent start with Lewis Travis and Holtby dictating play from the middle of the field.

Holtby should have given the visitors a 12th-minute lead after full-back Ryan Nyambe had slipped past Fraser and Javi Manquillo on the right and pulled the ball back, but the midfielder side-footed wastefully wide.

Newcastle finally started to work their way into the game as Miguel and Joelinton got themselves involved, and it was the Paraguay international who eventually opened the door with 10 minutes of the half remaining.

His astute reverse pass put Fraser in on goal and the Scotland international drilled the ball past Thomas Kaminski despite the goalkeeper getting a significant touch.

Miguel Almiron fired just over in stoppage time after racing into the penalty area from Dan Barlaser’s pass, but the tie was far from over when the half-time whistle sounded seconds later.

The Championship side resumed at a high tempo with 18-year-old frontman Tyrhys Dolan a particular threat, but the Magpies might have increased their advantage had Matt Ritchie been able to pick out Fraser with his 48th-minute cross after Rovers were caught on the counter once again.

Bruce’s men found themselves stretched repeatedly and it took a 58th-minute double save from debutant Gillespie to deny Ben Brereton and Amari’i Bell and preserve their lead.

Holtby blasted just wide from Dolan’s lay-off four minutes later as Rovers sensed an opportunity, although Blackburn continued to look vulnerable when they turned the ball over and Joelinton might have done better when he was presented with a 69th-minute run on goal by substitute Jacob Murphy.

Defender Derrick Williams twice stabbed over from Joe Rothwell corners with 12 minutes remaining and Murphy robbed Brereton before he could shoot to see his side home.