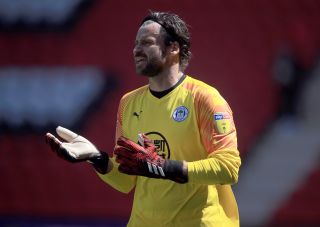 Derby have announced the signing of experienced goalkeeper David Marshall from Wigan.

The 35-year-old Scotland international spent a solitary season at the DW Stadium and becomes the latest player to leave the Latics following their relegation to Sky Bet League One.

Marshall will stay in the Championship with Derby having agreed a deal to join Phillip Cocu’s side.