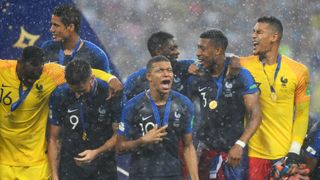 France won their second World Cup on Sunday with a thrilling 4-2 victory over Croatia in Moscow.

It means that Didier Deschamps is only the third person to win the World Cup as both a player and a manager, after Brazil's Mario Zagallo and Germany's Franz Beckenbauer.

That was not the only impressive stat from one of the most entertaining World Cup finals in recent history, however.

With the help of Opta, we take a look at some of the best facts and figures from a remarkable game.

3 - Didier Deschamps has become the third person to win the World Cup as a player and as manager after Mario Zagallo and Franz Beckenbauer. Champion. July 15, 2018

- Antoine Griezmann has scored 10 goals for France in major tournaments - only three players have scored more for Les Bleus (Michel Platini 14, Just Fontaine 13, Thierry Henry 12).
- Paul Pogba became the first Manchester United player to score in a World Cup final, and the first Premier League player to do so since Emmanuel Petit in 1998.
- Pogba's goal was the first scored from outside the box in a World Cup final since Marco Tardelli for Italy against Germany in 1982.

- Croatia are the first team to lose in their first ever appearance in a World Cup final since the Netherlands in 1974 (1-2 vs Germany).
- Ivan Perisic has been directly involved in 11 goals at major tournaments (7 goals, 4 assists) - more than any other Croatia player.
- Perisic became only the second player to both score a goal, and concede a penalty in a World Cup final, after Marco Materazzi for Italy in 2006.
- Mario Mandzukic is only the second player in World Cup history to score a goal for his team and an own goal in the same match, after the Netherlands' Ernie Brandts against Italy in 1978.

2 - Mario Mandzukic is just the second player in World Cup history to score a goal for his side and an own goal in a single game, after Ernie Brandts for the Netherlands versus Italy in 1978. Quirk. July 15, 2018