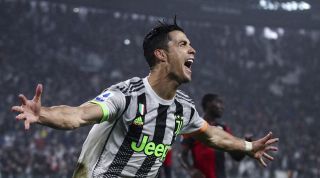 Ronaldo celebrated his 35th birthday earlier this week and shows no signs of winding his career down.

The Portugal international has scored 22 goals in 27 appearances in all competitions this term, including 19 in 19 Serie A outings.

Ronaldo has previously expressed a desire to remain in the game until 40, and Berbatov believes that is a realistic ambition.

“Cristiano Ronaldo, turned 35 this week and is still at the top of his game. He's scored 33 goals [including strikes for Portugal] this season which is phenomenal," he told Betfair.

“Ronaldo has said he wants to be playing at the highest level when he's 40. I can see him doing that. Ryan Giggs was playing for United at 40 and, when you have good coaches around you who know how to manage you, it is possible.

“The Portuguese star is still fired up and it is a joy to me to see him, and 38-year-old Zlatan Ibrahimovic, performing brilliantly. I did ask myself recently if I had retired too soon. But you need to listen to your body and know when to stop.”

Gareth Bale was widely tipped as the man to fill the void in Ronaldo's absence, but the Welshman continues to be linked with a move away from Madrid.

And Berbatov believes Bale still has plenty to offer los Blancos after the player's agent insisted his client was going nowhere.

“Gareth Bale's agent has said the player has no intention of leaving Madrid, even though he nearly signed for a Chinese team last summer and there are rumours about where he could be off to at the end of this season.

“When journalists and fans talk about transfer rumours they often only think about the player's role in his team and forget that there are other factors, including how the player's family feel. If the player and his family are happy in the city then he could be content at a club.

“I read that Bale's family really like living in Madrid, so it could be that he does stay. As long as he's at the club, Bale will play and his performances show that he still has a lot to offer them. But I would still like to see him starting every week.”