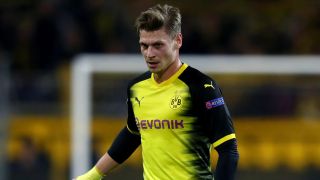 Borussia Dortmund have suffered a blow after key defender Lukasz Piszczek suffered a lateral collateral ligament injury while on international duty with Poland.

Piszczek, 32, sustained the problem in his right knee during the 4-2 World Cup qualification win over Montenegro on Sunday.

The right-back has played in all 11 games across all competitions for Dortmund this season, helping them to the top of the Bundesliga, but reports in Germany suggest he is set to be out for a few weeks, pending the outcome of further tests.

Dortmund's statement confirming the injury did not reveal the severity of the LCL problem and only stated he would be "unavailable for the time being".

Peter Bosz's men have a crucial home match against last season's runners-up RB Leipzig on Saturday, with top-flight away games against Eintracht Frankfurt and Hannover to follow before the end of the month.

Dortmund also play APOEL in the Champions League and Magdeburg in the DFB-Pokal over their next five fixtures.