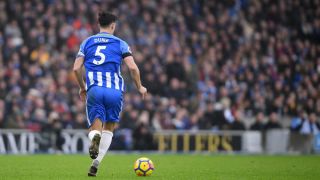 Brighton and Hove Albion's Lewis Dunk equalled the record number of own goals scored in a single Premier League season by netting his fourth against Swansea City on Saturday.

The centre-back's misfortune ultimately counted for little as Brighton ran out comfortable 4-1 winners to end Swansea's 10-match unbeaten run in all competitions.

But he did earn unfortunate share of history when he got in the way of Tammy Abraham's long-range effort five minutes from time.

The ball took a hefty touch off Dunk and flew past the helpless Mat Ryan, giving Swansea the slightest glimmer of hope before Jurgen Locadia restored the three-goal advantage.

It was Dunk's fourth own goal of the season, following unintended efforts against Manchester United, Manchester City and Liverpool.

He moves level with Martin Skrtel, who set the record during the 2013-14 season at Liverpool.

4 - Lewis Dunk has scored four own goals in the Premier League this term - the joint-most by a player in a single season in the competition's history (also Martin Skrtel in 2013-14). OopsFebruary 24, 2018