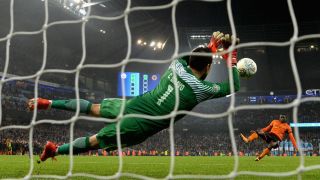 The EFL plans to talk to Pep Guardiola following his criticism of the match ball used in Manchester City's penalty shoot-out victory over Wolves on Tuesday.

City failed to find the net in 120 minutes of the fourth-round EFL Cup clash at the Etihad Stadium before heroics from goalkeeper Claudio Bravo enabled them to triumph 4-1 on penalties.

Guardiola was critical of the Mitre ball, which is usually used in Football League matches, saying it was "unacceptable for high-level competition".

In response to the Spaniard's comments, the EFL assured the ball meets the necessary requirements and are planning to discuss his concerns prior to City's next appearance in the competition.

"Clearly, preference is a subjective matter, but overall the entertainment provided across [Tuesday's] round-four ties would suggest that the ball used is not having a negative impact in the competition.

"We will look to engage with Mr Guardiola and Manchester City to fully understand any concerns in advance of their round-five tie."

Guardiola was unhappy with the movement of the ball but assured he was not trying to make excuses for his team's difficulties against Championship opponents.

"It is not acceptable. The ball was unacceptable for a high-level competition," the Spaniard said.

"It is too light, it moves all over the place, it is not a good ball. It is impossible to score with a ball like that and I can say that because we won, I'm not making excuses.

"All of my players said, 'What is that?' [It's] not a serious ball for a serious competition.