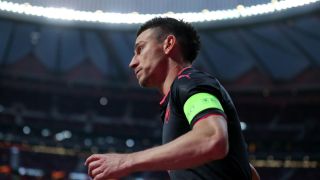 Laurent Koscielny has been named as Arsenal captain for the 2018-19 season.

Experienced defender Per Mertesacker served as the Gunners' club captain before his retirement at the end of last season and now fellow centre-back Koscielny will take on the responsibility.

One of the quartet will take the armband in Sunday's Premier League opener against Manchester City, given Koscielny remains sidelined with the ankle injury that ruled him out of France's triumphant World Cup campaign.

"The captain of this group is Laurent Koscielny, who is injured at the moment," the head coach told his club's official website.

"After Laurent, our other captains are Petr Cech, Aaron Ramsey, Mesut Ozil and Granit Xhaka.

"I want leaders in the team, every player at every time to have the capacity to show leadership, but these are the five players who have a possibility to be the captain."

The game against City will be Arsenal's first in the Premier League without Arsene Wenger as manager since September 1996.