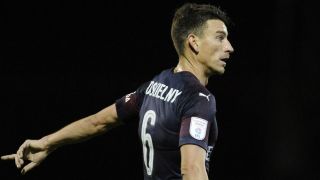 Unai Emery will take no risks with the returning Laurent Koscielny as the defender nears a comeback after seven months out.

The centre-back has not featured for the first team since rupturing his Achilles in the Europa League semi-final second leg against Atletico Madrid in May, with the injury ruling him out of France's World Cup squad.

However, after a lengthy recovery period, Koscielny has lined up for Arsenal's under-23 team twice and could be involved with the squad for Saturday's Premier League fixture with Huddersfield Town.

"We are on a gradual way with him," Emery told the media on Thursday.

"He's played two matches with the under-23s. He played 85 minutes on Tuesday and our plan is that he can maybe be with us in the 18 on Saturday. Maybe he can play against Qarabag in the Europa League.

"He's working with us with very big performances every day in training. He's playing for the under-23s with a good feeling. The next step is for him to be with us."

When asked what the 33-year-old will bring to the team, the Spaniard replied: "Experience, quality, personality. We need every player and we need also for him to train with us. The next step is playing. He can play with us and be with us normally."

Koscielny's return may come at a good time after fellow defender Rob Holding suffered a potentially serious knee injury in the 2-2 draw against Manchester United on Wednesday.

Emery revealed the club's medical staff are continuing to assess the Englishman, adding: "We are waiting. The club can give us communication about this.

"The best news for me is [being] calm, but the doctors are looking at him and they are going to communicate with us. At the moment, the first news is not good."

Aaron Ramsey was also forced off at half-time at Old Trafford with a right ankle problem, though Emery is still hopeful the Welshman - as well as Mesut Ozil - may be fit to feature at Emirates Stadium this weekend.

"It's a different injury. It's smaller than Rob's," the former Sevilla and Paris Saint-Germain boss said when offering an update over Ramsey's fitness.

"Today it's very early because this morning we have been working, but with the players who didn't play yesterday. Tomorrow we'll train before the game on Saturday and that's the moment you can know if the players will be okay or not for Saturday."

On Ozil, who has been out with a back injury, he added: "This morning he worked with the physiotherapist on the pitch, running and touching the ball. Tomorrow will be the decision."