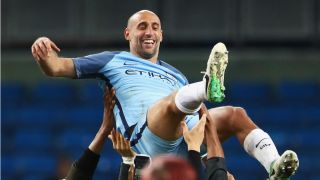 Pablo Zabaleta thanked Manchester City for making him a better player and a better person as he bade a poignant farewell to the Etihad Stadium after the 3-1 win over West Brom.

City announced over the weekend that Zabaleta would end a celebrated nine-year spell in Manchester when his contract expires at the end of the season.

It turned Tuesday's final home match of the campaign into a celebration of the popular Argentina international, who has won five major honours having joined City on the eve of Sheikh Mansour's takeover in 2008.

The 32-year-old looked on from the bench as Gabriel Jesus and Kevin De Bruyne scored in a first half when his compatriot Sergio Aguero dazzled - making Champions League qualification virtually secure ahead of the final-day trip to Watford.

Fellow long-serving star Yaya Toure made it 3-0 before Zabaleta entered the fray in the 62nd minute, when a rapturous welcome brought emotions to the surface.

"It's probably the hardest moment of my City career," he told Sky Sports, after being symbolically named as man-of-the-match inside the stadium.

"When I first came to Manchester I never thought it would be that long to be honest. It was a different era for the club

"I've been here from day one and I feel very honoured to be honest. It's been a wonderful nine years.

"In life sometimes you have to make tough decisions. I want to make the right decision for myself, for my family and for the club. It's the right time for me to move on but, believe me, I love this club.

"Thanks to the fans, the board and everyone at the club - they made me a better player and a better person and I was always proud to wear the shirt.

"It was so hard to play for half an hour, so many emotional moments. The good memories came to my mind."

Famed for the selfless, all-action displays that became his calling card, Zabaleta was keen to play down the efforts that have won him a permanent place in the affections of the City faithful.

"As I said before, I am so proud," he added. "What I have done for the club is just what every single player should for the team he is playing for.

"I am so proud to have been in probably the most successful period of City history."