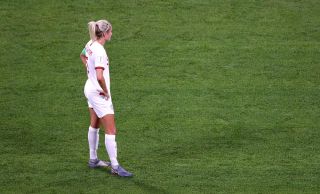 Steph Houghton had an 84th-minute penalty saved as England missed out on a place in the Women’s World Cup final, losing 2-1 to the United States.

Phil Neville’s side headed to Lyon with dreams of becoming the first senior England team – male or female – to contest a World Cup final since 1966.

However, the Lionesses’ third penalty miss of the tournament proved costly.

Alex Morgan then matched White in the race for the Golden Boot with the goal that restored the US advantage in the 31st minute, before the England forward had a second-half effort disallowed on a marginal offside call after VAR was consulted.

England were then the beneficiaries of a second VAR intervention, when White was awarded a penalty after Becky Sauerbrunn made contact with her trailing leg in the box.

However, captain Houghton – on spot-kick duty after Nikita Parris missed England’s last two – produced a poor effort from 12 yards, with Alyssa Naeher making the save low to her right.

The US will now be back at the Groupama Stadium on Sunday to take on the winners of the second semi-final between Holland and Sweden.

England – who had Millie Bright sent off for a second bookable offence before full-time – will face the loser of that match in Nice a day earlier, now hoping to achieve a third-place finish for a second successive World Cup.