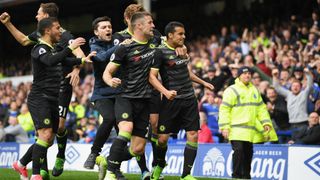 A Pedro stunner sent Chelsea on their way to an impressive 3-0 win at Everton as Antonio Conte's men passed arguably their last major test to take a huge step towards winning the Premier League.

Chelsea moved seven points clear of second-place Tottenham – who host Arsenal later on Sunday – and are left with four relatively straightforward fixtures against Middlesbrough, West Brom, Watford and already-relegated Sunderland, three of which are at home.

The early exchanges were frantic and both sides went close to breaking the deadlock – Dominic Calvert-Lewin hitting the upright for Everton, before the lively Eden Hazard agonisingly missed the target.

After an open first half Chelsea became more dominant in midfield following the interval, eventually breaking Everton's resolve through a moment of genius from Pedro 24 minutes from time.

A fortuitous Gary Cahill effort and a well-worked goal from substitute Willian followed towards the end as Chelsea rounded off an emphatic second-half performance, though the loss of David Luiz to what appeared to be a groin injury may provide cause for concern.

The result damages the hopes of closest challengers Spurs, who still have to face West Ham, Manchester United, Leicester City and Hull City after this weekend.

Everton's start at Goodison Park gave every indication that Chelsea were not going to have everything their own way.

With just over a minute gone, Ross Barkley played Calvert-Lewin into the left side of the area and the youngster drilled against the post.

Chelsea stepped things up soon after, though, and went very close in the 11th minute.

Diego Costa charged forward on the break and released Hazard in behind, but he could only find the side-netting after skipping past Maarten Stekelenburg.

The respective defences were continuously second best and Romelu Lukaku – linked with an end-of-season return to Chelsea – highlighted that when shrugging off David Luiz and firing just wide of the left-hand post from 25 yards.

And Costa was similarly dominant a few moments later, nudging Phil Jagielka before inexplicably slicing a volley well over from 10 yards.

Proceedings calmed a little towards the end of the half, but Everton still managed to spurn another chance. Enner Valencia got inside Cahill and crossed to Lukaku, who somehow failed to connect with it.

Chelsea were more purposeful at the start of the second half and they very nearly made the most of that when Victor Moses dragged a good effort narrowly wide of the left-hand post following a well-worked corner.

Everton remained a threat and Lukaku did well just after the hour mark, cutting in from the right, beating two men and then getting a shot away, but a deflection made it easy for Thibaut Courtois.

Chelsea finally produced the moment that their season has deserved, as Pedro was afforded space 25 yards from goal and he lashed an unstoppable left-footed drive into the top-left corner.

Any chance of an Everton turnaround was essentially put to bed 13 minutes later. Hazard lashed a low free-kick into the danger zone from the left flank and Stekelenburg parried it on to Cahill, who did enough to nudge the ball over the line.

4 - Gary Cahill has scored more Premier League goals against Everton than against any other opponent (4). Fantastic.April 30, 2017

Willian had not even been on two minutes before wrapping things, burying fellow substitute Cesc Fabregas' inch-perfect cutback to cap off a flowing move to bring the title closer.

- Ronald Koeman's two heaviest league defeats in charge of Everton have both come against Chelsea this term (5-0 and 3-0).
- The Toffees failed to score in a Premier League game at Goodison Park for the first time in 2017, having averaged 3.7 goals per match prior to this defeat.
- Chelsea kept their first clean sheet in the Premier League since January (v Hull), ending an 11-game run without one.
- Romelu Lukaku remains without a goal against former club Chelsea in the Premier League (six games).