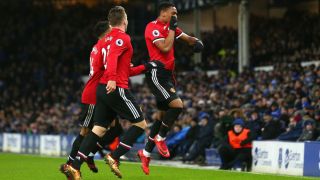 United went to Merseyside on the back of three successive draws and without top-scorer Lukaku due to a head injury, but fine second-half goals from Martial and the in-form Jesse Lingard brought their recent slide to a halt and moved them back above Chelsea into second and 12 points behind Manchester City, both of whom possess a game in hand.

Although Everton – captained by United's all-time leading goalscorer Wayne Rooney on his return from a virus – caused the Red Devils a few problems in what was a fairly turgid first half, the visitors generally controlled things and regularly tried their luck from distance.

But it was not until the second half that United started to find pockets of space in the Everton defence, with Jose Mourinho's attack looking rather more fluid without Lukaku.

And it was Martial – given a rare opportunity to lead the line – who broke the deadlock, producing a stunning finish just before the hour, with Rooney exiting against his former club shortly after.

The home side ramped the pressure up towards the end and really put United under the cosh, but Mourinho's men dug in and punished them on the break - Lingard sealing all three points in style with his sixth goal since the start of December.

Everton were particularly passive early on and allowed United to dictate possession, but the visitors did little to worry their backline and Jordan Pickford in goal.

A chance presented itself to Everton out of nothing in the 24th minute when Oumar Niasse charged down Phil Jones' clearance and got into the penalty area, but Marcos Rojo made a vital last-ditch challenge to block his effort.

United eventually sliced through Everton for the first time just before the half-hour mark, as Luke Shaw released Martial into the left side of the box and the Frenchman's low pass across the face of goal forced Pickford into action.

The game began to open up as the break neared and both sides went close in quick succession – Tom Davies first seeing an effort deflected just off target after a poor David de Gea clearance, before Paul Pogba sent a powerful 25-yard effort agonisingly wide.

Lingard troubled Everton with a driving run and shot from just outside the box that just missed the right-hand post.

United looked a bit sharper upon the restart and almost went ahead in spectacular fashion in the 51st minute, Juan Mata's 30-yard effort striking the left-hand post.

6 - Anthony Martial has been directly involved in six goals in his last five appearances against Everton in all competitions (four goals, two assists). Sweet. January 1, 2018

But Martial broke through in the 57th minute, caressing a delightful right-footed effort into the top-right corner from the edge of the box after fine play from the exceptional Pogba.

But with the Toffees looking more threatening than they had all game, United hit them with a sucker punch nine minutes from time.

Lingard drove at the defence and unleashed an unstoppable 25-yard drive that flew beyond Pickford and into the top-right corner, ending Everton's resistance and wrapping up a commendable win for United.