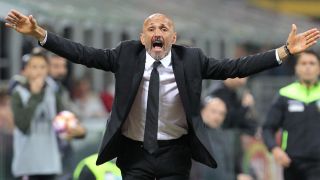 Roma coach Luciano Spalletti expressed regret over his return to the club in a heated response to questions over the decision not to play Francesco Totti in his side's 4-1 victory over AC Milan.

Totti, who appears set to retire at the end of the season, has made just 15 appearances in Serie A this term and Spalletti has faced frequent questions about the veteran's involvement during what are likely to be his final days as a Roma player.

Milan supporters at San Siro had prepared a banner to say farewell to Totti, but Spalletti opted to send on Stephan El Shaarawy instead of the 40-year-old and was vindicated when the substitute scored Roma's third goal.

When asked about the decision, Spalletti - who previously coached Roma for four years between 2005 and 2009 - told Mediaset Premium: "All this really disappoints me. If I could go back, I would never have returned to Roma.

"We always end up talking about the same thing. This team deserves praise, but instead we are always talking about this and if I play him for just five minutes, I'm disrespecting a legend, then if I don't introduce him, that's wrong too.

"Tonight we set a record for six consecutive away victories. We've done great things, even if we haven't always played brilliantly, but these statistics will remain."

A first-half brace from Edin Dzeko and further goals from El Shaarawy and Daniele De Rossi ensured Roma returned to second place in Serie A one week ahead of their clash with league leaders Juventus.

Victory over Juventus would narrow the gap between Roma and the frontrunners to just four points, but Spalletti was relieved to have seen his side recover from a difficult defeat against their local rivals.

"The issue is here we are fighting to get into the Champions League and win the game in any way possible," said Spalletti.

"We are a good team and tonight we should've finished Milan off earlier, because if the third goal hadn't gone in straight away, we would've been under pressure [at 2-1 ahead]."

He added: "Don't make me into the guardian of Totti's history and legend. I have to deal with a football player. I don't know what else to do."

The result left Milan in danger of slipping out of Serie A's top six in their final three games.

The Rossoneri are sixth, three points ahead of Inter, and coach Vincenzo Montella called for his players to show determination after a fourth game without a win.

He said: "I think there's a problem of organisation, form and status. We had opportunities that were not turned into goals, as we often get the final ball wrong.

"Having said all of that, I told the lads that their performance, desire and focus will decide the next line-up, because I need determination now. They mustn't let their heads drop the way they did after the third goal.

"We have to finish the season with decorum and get into Europe, which has been our target all year."