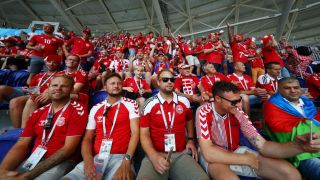 Thomas Sorensen believes the fear factor of travelling to Russia has dissuaded more Denmark fans from making the trip to get behind their team at the World Cup.

In both of their opening Group C matches, Danish supporters were heavily outnumbered by their counterparts from Peru and Australia, although it seems not to have fazed Age Hareide's men, who have picked up four points and will secure a last-16 spot if they avoid defeat against France in Moscow on Tuesday.

Russian hooligans dominated the headlines at Euro 2016 due to a number of violent incidents, although there have been no such problems at this year's finals, while the nation's politics are also a bone of contention for some.

Sorensen, part of the last Denmark squad to reach the second round in 2002, admits a larger following would have been good to see, but understands the reasons behind many people choosing to stay away.

"It's always hard, you'd always like to see a great backing," he told Omnisport.

"I think everyone would have liked to see more Danish fans over here but it is what it is. I've been there as a player, I played in South Korea and Japan and we didn't have many fans there but you only hear it sporadically during the game and when it kicks off it's just game on and you can't change it.

"Maybe there's a little bit of fear. There's been a lot of talk about politics in Russia and maybe people are a little bit afraid of taking families over.

"People are comfortable and living a good life and we can see it from home.

"Those are some of the factors that prevent people so fair play to the likes of Peru, we talked to some of their fans and what they've invested and the amount of money - some people have sold their houses to be able to come!

"And that's what it's all about, that was a fantastic thing to see as you walk through Moscow and see all the fans, so that's a great thing for the World Cup."