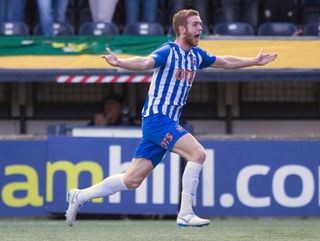 Stuart Findlay has been called into the Scotland squad following an injury blow for Liam Cooper.

The Leeds centre-back was ruled out for up to six weeks after suffering a groin injury during his team’s victory over West Brom on Tuesday, hours after Steve Clarke named his latest squad.

Clarke has gone back to former club Kilmarnock to select Findlay for the upcoming European Championship qualifiers against Russia and San Marino. The news was announced on the Scotland National Team Twitter account.

Findlay is yet to win a full cap but the 24-year-old has previously been involved in squads and played 35 times across the under-age national teams.

Cooper started both defeats against Russia and Belgium last month alongside Charlie Mulgrew.

Norwich’s Grant Hanley, who has not played since August 24, and Aberdeen’s Michael Devlin are the other centre-backs in the squad.

Aberdeen’s Scott McKenna and Hearts defender John Souttar have both been missing through injury in recent weeks.