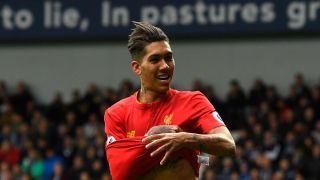 Liverpool boss Jurgen Klopp is hopeful Roberto Firmino can return to bolster his forward line for the final-day clash with Middlesbrough in the Premier League.

Victory over their relegated opponents will guarantee a top-four spot for Liverpool, who did not feature in Europe this season.

Klopp's men won 4-0 at West Ham as Firmino nursed a knock last time out but the Brazilian would be a welcome addition, having registered 12 goals in all competitions this term.

"We could not decide until now, but he feels good and he feels comfortable. He did a lot of things, but was not part of team training. That's not a problem after this long season.

"I think we will make a final test tomorrow. In this moment, I would rather say 'yes' than 'perhaps', but I am not sure."

Liverpool will once again be without captain Jordan Henderson, who has not featured since February's 2-0 win over Tottenham due to a foot injury.

Nevertheless, Klopp is not concerned over the England midfielder's long-term fitness prospects and praised his continued influence upon the Liverpool squad.

"It's not that difficult the injury. It's difficult to make the rehabilitation because what this injury needs is time," he said.

"I had situations like this with I don't know how many players and at one point you think it would have been better if he had broken his leg and you know everything about it.

"That is a little bit the situation but we are not one second without our captain because Hendo is always around.

"He has an unbelievable important role, not only on the pitch but in the dressing room, here at Melwood. He's always here and we will not be without him on Sunday.

"There are no concerns. The only problem was the season was a little bit too short for him to come back."

"We've not been one second without our captain."Klopp reveals the influence has had while injured: May 19, 2017