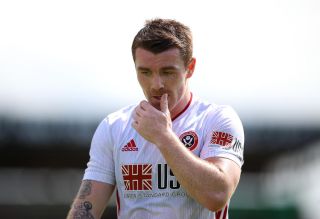 The 28-year-old will be named in Steve Clarke’s squad for next month’s European Championship qualifiers against Russia and San Marino when it is announced at noon on Tuesday.

The uncapped Fleck has made five Premier League starts this season after being a key figure in Sheffield United’s promotion to England’s top flight.

The former Rangers and Coventry player was included in Alex McLeish’s final two squads but is yet to make his international debut.

The former Scotland youth international has previously been unavailable to Clarke – his long-planned wedding cost him a place for games against Cyprus and Belgium in June and he was injured when the most recent squad was announced.

Fleck has forced his way into a strong Scotland midfield after impressing in a 1-0 defeat against league leaders Liverpool on Saturday.

Clarke has admitted he is building for the play-offs next March after defeats by Russia and Belgium earlier this month saw Scotland drop to fifth place in the group.

The Scotland boss has been considering his options in other areas with Steven Naismith’s ongoing hamstring problems creating a vacancy up front.

Clarke also has decisions to make in central defence with Scott McKenna and John Souttar still missing through injury, although the former could return for Aberdeen this weekend.

Grant Hanley has not played for Norwich since injury cost him a place in the last squad, although he is fit again, while David Bates cannot get a game for Sheffield Wednesday after being called up last time.

Liam Cooper, Charlie Mulgrew and Michael Devlin have continued to play for their clubs since being called up for the September double header while Kilmarnock’s Stuart Findlay is available again.

Hearts centre-back Craig Halkett was on Clarke’s radar last month but he suffered a knee injury on Saturday which could rule him out for the rest of 2019.