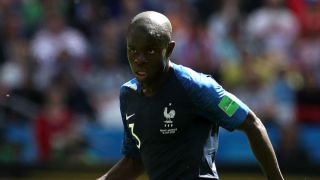 N'Golo Kante has backed France to step up a gear and improve on their underwhelming early World Cup performances.

France came through Group C with seven points, conceding only once, but their array of stars failed to light up the tournament in a trio of uninspiring displays.

A goalless draw with Denmark – the only stalemate of the finals in Russia – saw both sides jeered off the pitch and there is an expectation that Didier Deschamps' men must be better against a Lionel Messi-led Argentina.

But Kante believes the circumstances and opposition were to blame for the Denmark match, with both teams happy to accept a point and progress.

"I think we can do better and we will improve in the next game," the Chelsea man said. "We all knew it was a special game against Denmark, because we knew all we needed was a draw.

"We played against a very well-organised team, very good defensively. The tempo was slow and that's why we played this kind of game. But we can do better.

"The quality of the game sometimes depends on the opposition. Denmark was a special game. We can improve and be better and we will prepare for the game in the best way.

"On the pitch, I didn't feel the booing was for us. It was just for the slow tempo of the game at the end.

"We can understand supporters want to see goals and a spectacle, but sometimes both teams are focused on what they need and we can be happy to have finished first in the table."