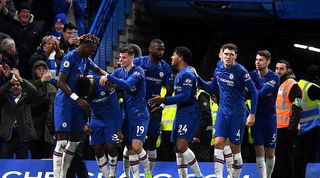 Frank Lampard has called on Chelsea's young players to continue making an impact ahead of the business end of the season.

The Blues were unable to make any new signings last summer due to a transfer ban, although Christian Pulisic did arrive at Stamford Bridge having agreed a move last January.

This year's mid-season market came and went without Chelsea registering any new players, despite having seen their ban reduced by the Court of Arbitration for Sport.

Lampard has leaned heavily on a number of the club's youngsters this term, with Tammy Abraham, Mason Mount and Fikayo Tomori all becoming first-team regulars.

Reece James and Callum Hudson-Odoi have also been heavily involved in recent weeks as Chelsea continue their push for a place in next season's Champions League.

And Lampard wants his starlets to continue in the same vein as his side attempt to hold on to fourth place.

“It’s a critical time for us and I need the young players to do their thing," he said.

"The young players have made a great impact this season and we’ve had reliance on them to a degree, because we knew we couldn’t bring anyone in at the start.

"Through the season I think there are going to be some difficult times and, if you look at Tammy Abraham at the moment, and maybe Mason [Mount], I think the break was particularly good for them as they can come back and hopefully show more levels in their game.

"There’s been tough little times recently and I think it’s up to them now. They’ve shown they’re part of this first-team squad and they’ve all had their good inputs but I want more and I think I want more now."

Lampard is also inexperienced at this level as a manager, and the ex-Derby boss admits he is always assessing his own work.

“I always like to reflect on myself and how I work,” he added. “When you’re a new manager at a club, and I only came in last summer, you always think: ‘What small tweaks can I make to how we prepare and how we train daily?’

“There was a lot of self-reflection [during the break]. And just having some time away, having a bit of clarity, I think we should be happy that we’re in fourth position. I think that would have been a plus at the start of the season.

"At the same time how can we get that extra 10 or 15% which I think we’ve been lacking? We would have had a lot more points on the board [if we did] and made fourth look a lot more comfortable.”