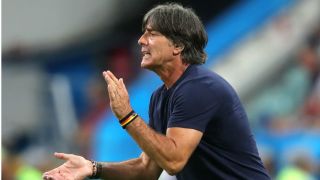 Joachim Low believes there must be "big changes" in Germany after the nation's shock group-stage exit at the World Cup.

The defending champions stunningly finished bottom of Group F after suffering a 2-0 loss to South Korea on Wednesday.

Head coach Low, whose future remains unclear despite signing a new deal until 2022 before the World Cup, said action was needed after Germany's first opening-round exit at the tournament since 1938.

"We've had this situation – when the team was knocked out of the European Championship in 2004 after the group stage," he said.

"After that, there were a lot of changes. Over 14 years we got better and better, we were the most consistent team in the world for the last 10 years and we were world champions.

"But now, with the exit and huge disappointment, we must reflect what the consequences will be and the right steps.

"We need changes, big changes. And about that, we must talk."

Your support across the globe was incredible. We celebrated together in 2014, but sometimes in football you have to accept defeat and admit that your opponents were better.Congrats to and , and of course to on their win.Thanks to Russia for your hospitality! June 28, 2018

Germany never hit top form in Russia and Low, who has been in charge since 2006, said time was needed to pinpoint what went wrong.

"It's too early to say. Of course, we talked about it. But there isn't a single reason or a single thing for why we failed," he said.

"Now we need a bit of time and a few conversations and then we will give answers."