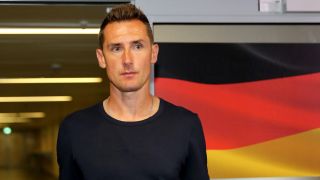 Germany legend Miroslav Klose is confident about his nation's chances of overcoming Sweden on Saturday, stating his belief that Joachim Low's side perform best under pressure.

Low's men suffered defeat in their opening match against Mexico and risk becoming the third world champions in a row to exit at the group stages if results on Saturday go against them.

Victory for Sweden against Germany, accompanied by a Mexico win over South Korea earlier in the day, would send Die Mannschaft on an early flight back to Berlin.

Defeat to Mexico prompted criticism of the side, but Klose, the all-time leading scorer at the World Cup with 16 goals, is confident ahead of the match.

"We play the best games under pressure. That's why, as far as Saturday is concerned, I'm very positive," he told Tz.

Klose is also not interested in making excuses for the display against Mexico, as he added: "The grass too high, the referee bad, the sun too strong - I do not like that.

"I have always gone ahead and tried to urge the others along. We have people who have to deliver now and we have the character to come first."