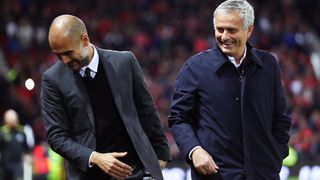 Mourinho has said he will rest stars for the trip to the Emirates Stadium due to a busy run of fixtures and with his side outsiders to claim a top-four finish.

Manchester United are fifth in the table and just a point and place behind City, who host Crystal Palace on Saturday.

But Guardiola believes Mourinho would never give up on an encounter, expecting United to target victory against sixth-placed Arsenal.

"I am pretty sure United are going to go to London to win the game," he said.

"What I know a little bit from the times I faced my colleague, Jose Mourinho, he is never going to drop one game."

However, United are on track to reach the Europa League final, having beaten Celta Vigo 1-0 away from home in the first leg of their last-four tie.