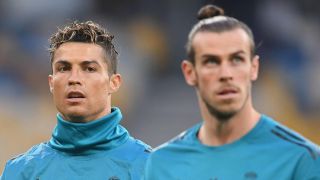 Former Chelsea and Barcelona star Eidur Gudjohnsen claims Liverpool have arguably the most dangerous attacking trio in European football, but has backed Real Madrid to win the Champions League final.

Gudjohnsen, 39, lifted UEFA's biggest club prize with Barca in 2008-09, and has assessed the chances of the Reds and Madrid, as the holders from Spain aim to capture the title for the third campaign in succession.

The former Iceland international acknowledged the steady improvements Jurgen Klopp has made to his team, but Gudjohnsen expects Zinedine Zidane's side to come out on top at the NSC Olimpiyskiy Stadium in Kiev.

"Liverpool have had a fantastic second part of the season… but Madrid have the experience, they have the know-how, they have players who can change games in one moment," he told Omnisport, courtesy of Nissan, official UEFA Champions League sponsor.

"I think with the experience over the last two years and the experience and the history of the club, Madrid will lift the trophy. It's not easy to say, but it's my opinion."

If the Premier League side are to spring an upset, Gudjohnsen knows the Reds' dynamic forward line is sure to exert a decisive influence.

"They [Liverpool] have a lot of variation in their game," he said.

"The key is the organisation at the back. The defence is much better this year than it has been in recent years.

"But then you have the three players up front that can change any game. When [Sadio] Mane, [Roberto] Firmino and [Mohamed] Salah are fit and playing together, they're almost the most dangerous trio in European football."