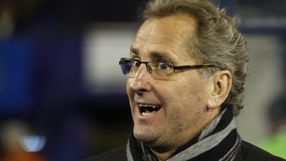 The tournament in Poland and Ukraine will be Sweden's first championship with Hamren at the helm. He succeeded Lars Lagerback who resigned after Sweden missed out on qualifying for the 2010 World Cup and knows he has a tough task ahead.

"If we had been realistic we wouldn't have beaten Netherlands in the final game of qualifying to progress to the finals either."

He remains wary of Ukraine who Sweden meet in their first game in Kiev on June 11.

"Especially in the first match the host nation is usually tough to beat. Sporting-wise the sides are very even but now they have an entire nation behind them. It will be a difficult but very exciting match," Hamren forecast.

Sweden then face England, who finally ended a 43-year run without a win against the Swedes with a 1-0 victory in a friendly at Wembley last November.

Hamren said Sweden needed to get the maximum out of every player to stand a chance against what on paper are better teams.

"They have more players to choose from so we must be better at other things, like teamwork and team spirit"

Hamren uses the melancholy and pessimistic donkey from A.A. Milne's classic children's book Winnie the Pooh to explain what kind of mentality is needed for Sweden to be successful.

"I talk about Eeyore with my players. If we want to have success we can't have any Eeyores in our team. Eeyore is not a winner, he's a really good friend, and you need them too, but not to play in our national team."

Sweden's stand-out player is AC Milan's Zlatan Ibrahimovic, top scorer in Italy's Serie A, but Hamren said: "The team is the most important player.

"We need the first 11 and the whole squad at their best and when we play with energy, courage and good organisation we can beat any team."

The coach rates World and European champions Spain as favourites to retain the title but felt others like Germany and the Netherlands are not far behind. Asked about any potential dark horses his answer was swift.

"Yes, Sweden! Of course we dream of being the Denmark of 1992 or Greece of 2004. That dream is the same for all the players and countries and that is what is so great about football - sometimes the most realistic thing doesn't happen."