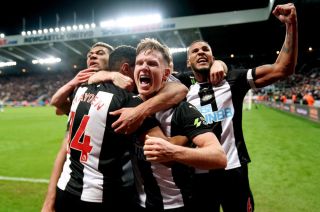 Hayden headed the returning Allan Saint-Maximin’s cross past Kepa Arrizabalaga four minutes into stoppage time to send the home fans among a crowd of 52,217 at St James’ Park into raptures.

His first goal since February last year clinched a 1-0 win on a day when Joelinton had hit the crossbar with a first-half header, but Martin Dubravka had to make a vital one-on-one save from N’Golo Kante as Chelsea dominated without ever being able to find the killer touch.

In a scrappy start to the game, it was the home side which created the first half-chance when Miguel Almiron created space for himself on the left to cross to the far post, where Saint-Maximin headed tamely wide.

Chelsea soon warmed to their task with Jorginho orchestrating from central midfield and Willian probing from the left, and it took a solid block by Ciaran Clark to repel Cesar Azpilicueta’s firmly-struck eighth-minute effort.

Saint-Maximin, who had been out of action since damaging a hamstring on December 8, got his first chance to run at full-back Reece James with 19 minutes gone, and he got the better of the defender as he came inside, only to slash high and wide.

However, Joelinton was desperately unfortunate not to open the scoring two minutes later when he met Federico Fernandez’s inviting cross with a powerful header, but saw it crash back off the crossbar with keeper Kepa beaten.

But opposite number Dubravka had to be at his best to deny Kante one-on-one after James had played him in with a fine 34th-minute pass.

Fernandez could not hit the target after climbing to meet Jonjo Shelvey’s free-kick seven minutes before the break, and Mason Mount was equally inaccurate after getting his head to Hudson-Odoi’s ball in, although it was the Blues who finished the half with a flurry.

They largely maintained control of the game after the restart with a high-intensity press which repeatedly caused Newcastle problems, and they should have taken the lead with 53 minutes gone when Willian dragged a left-foot shot wide after Mount and Abraham had staged a pacy counter-attack.

Dubravka was grateful to feel Azpilicueta’s drive thump into his midriff and to field Kante’s skidding effort in quick succession with the Magpies firmly on the back foot, although Kepa had to get down well to claim Shelvey’s curling 61st-minute attempt.

Abraham screwed a 73rd-minute shot wide from a narrow angle after touching the ball past Dubravka, and Matt Ritchie had to hack off the line after the striker had got the better of the keeper once again.

Substitute Emerson saw a long-range piledriver deflected just wide as time ran down, but Joelinton might have snatched it at the death, only to miss the target from Saint-Maximin’s lay-off.

Newcastle finally struck with seconds of stoppage time remaining when Hayden met Saint-Maximin’s cross with a firm header which Kepa could only push into his own net.