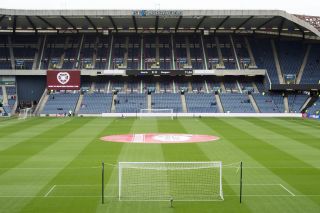 The Scottish Rugby Union has had positive early discussions with Hibernian and Hearts over using BT Murrayfield for football matches.

Murrayfield has the advantage of having a large footprint and holds more than three times the capacity of both Easter Road and Tynecastle.

Talks have also involved the Scottish Government as rugby officials look to aid other sports’ return from the coronavirus suspension.

“These are at early stages but we’re very lucky having the estate around BT Murrayfield,” said SRU chief executive Mark Dodson, who estimated the stadium can hold about 10,000 fans even with two-metre social distancing rules.

“We’ve got lots of room and we’re practised at putting on big events. We have the biggest stadium in Scotland and it’s only natural that if you’re going to have to be socially distant, the bigger stadium you have, the more chance you have.

“We’ve had conversations with Hibs and Hearts – they are at an early stage.

“They want to get playing football as soon as they possibly can safely. We offer them an alternative and that is a step forward for sport in general across the nation.

“Our intention is to work with the government and play a role in getting sport back being played.

“If BT Murrayfield can become a bio-bubble where we can safely get games played, we’re very happy.”