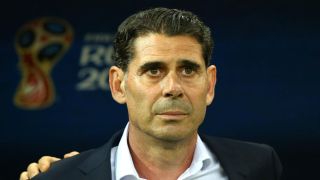 Fernando Hierro laughed off suggestions Spain are self-managed following his shock appointment as head coach on the eve of Russia 2018.

A stunning chain of events, which featured predecessor Julen Lopetegui accepting the head coach role at Real Madrid from the start of next season and the former Porto boss then being sacked by the Royal Spanish Football Federation for keeping them out of the loop in the negotiations, left Hierro suddenly in charge of one of the tournament favourites.

Despite the turbulence around the team, Spain performed superbly in a thrilling 3-3 draw against Portugal before grinding out a 1-0 win over Iran this week.

Progress from Group B can be sealed against the already-eliminated Morocco in Kaliningrad on Monday, but a question at his pre-match news conference asking whether his team were overseeing themselves showed the jury remains out on the former Madrid captain.

"That is an excellent question," he chuckled. "It's true I was placed in the position of head coach and that's that.

"As soon as I became coach I was the coach 100 per cent, nothing else."

Accusations of self-management are perhaps easy to make on account of Spain's well-honed passing style remaining so instantly recognisable.

Diego Costa has provided extra edge up front but, despite Iran's dogged resistance causing problems last time out, Hierro is not ready to change to a more muscular approach.

"If we put in more muscle I think we would be playing a different type of football. We have much more to offer than muscle," he said.

"We do have physical qualities but we also have our vision for football. I think muscles are not really our style."

A pair of 1-0 defeats to Iran and Portugal mean Morocco are on their way home despite playing some fine attacking football in both their matches – let down only by wayward finishing.

"We know they are an excellent team. They qualified for the World Cup finals after not being here for many years," Hierro added.

"If you look at their first match they lost it in the 93rd minute with an own goal and they had clear opportunities against Iran.

"They had an excellent game against Portugal, so we're talking about a tough nut to crack that moves very fluidly up front.

"Basically, if they've qualified for a World Cup we know they are going to be tough rival. We can't afford to relax. We are aware Morocco are not going to give anything away and anything we win will be through hard work and effort. Morocco deserve our respect."