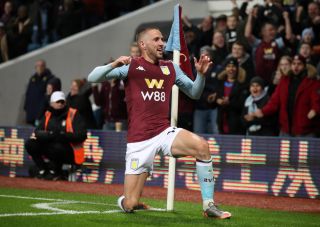 Aston Villa reached the Carabao Cup final with a dramatic win over Leicester on Tuesday evening.

Trezeguet’s stoppage-time winner was the final step on a route to Wembley which began at Crewe in August.

Here, the PA news agency looks back over the six matches that took Dean Smith’s side to the March 1 showpiece against Manchester City or Manchester United.

You've seen all the goals but now check out our alternative view of Tuesday night's #CarabaoCup win over Crewe.— Aston Villa (@AVFCOfficial) August 29, 2019

Ezri Konsa scored an early opener and Conor Hourihane struck twice before half-time to ensure a straightforward night. Keinan Davis, Frederic Guilbert and Jack Grealish ran up the score in the second half, with Ryan Wintle’s consolation making it 5-1 at the time.

Jota opened the scoring, with Hourihane and Grealish on target again either side of Hayden Roberts’ reply for a much-changed Seagulls side.

Ahmed El Ghazi’s opener was cancelled out by Patrick Cutrone, but Ahmed Elmohamady quickly restored Villa’s lead and they held on to reach the last eight. It would not be Elmohamady’s last major contribution in the competition.

Villa were the beneficiaries of a clash with Liverpool’s Club World Cup commitments as the Reds sent out a second-string team. Hourihane’s opener was followed by a Morgan Boyes own goal and Jonathan Kodjia scored twice before half-time. Wesley rounded off the scoring.

Guilbert gave Villa a first-half lead and Orjan Nyland made several fine saves, but Kelechi Iheanacho’s second-half strike left the tie in the balance heading back to Villa Park.

Matt Targett gave Villa the lead on the night and in the tie with a breakaway goal in the first half. Iheanacho finally found a way past the inspired Nyland with just over a quarter of an hour remaining but in added time Elmohamady crossed for fellow Egyptian Trezeguet to volley Villa into the final.