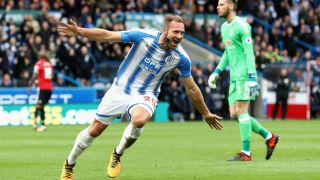 Manchester United's unbeaten start to the Premier League season came to an end in a shock 2-1 loss at Huddersfield Town on Saturday, with Victor Lindelof the villain of the piece.

Former Benfica defender Lindelof was brought on as a replacement for the injured Phil Jones in the 25th minute and the hosts scored both of their goals shortly after his introduction, with United unable to claw things back despite Marcus Rashford's late goal.

Jose Mourinho's side appeared to be in control until Jones' withdrawal, but suddenly the home side turned the tables, scoring two within eight minutes of Lindelof's entrance.

Aaron Mooy netted the opener, before Laurent Depoitre added the second as he punished an awful error from United's Sweden international international centre-back.

United's response was by no means emphatic, with Mourinho's men remaining devoid of craft in the final third, leaving Romelu Lukaku lacking service for most of the match.

Rashford – a half-time substitute for Anthony Martial – pulled one back for United with 12 minutes to go, but Huddersfield managed to hold on to a slender win to seal a famous day for the Terriers, who claimed their first top-flight triumph since August.

13 - Only Wayne Rooney (15) has scored more Premier League goals as a teenager for than Marcus Rashford. Prodigy.October 21, 2017

Proceedings were feisty early on as the two clubs clashed for the first time since 1972, with three players receiving yellow cards inside the first nine minutes and both sides going close to a goal.

The first chance fell to Lukaku, as the Belgian smashed the ball at Jonas Lossl from the edge of the box, before Depoitre failed to connect with Mooy's teasing free-kick delivery in the 16th minute.

Jones' forced substitution through injury proved a blow, with Lindelof replacing him in what was ultimately a vital moment in the match, as Huddersfield took the lead three minutes later.

Mooy was too powerful for Juan Mata in midfield and charged forward, setting Thomas Ince up for a shot which David de Gea parried away, only for the Australian to smash home the rebound.

And the Terriers got a second shortly after – Depoitre coolly skipping past De Gea and finishing into an empty net after Lindelof inexplicably left Lossl's long kick.

Mourinho responded to United's woeful first half by hauling off Mata and Martial in favour of Henrikh Mkhitaryan and Rashford at the break.

Neither had a huge impact initially, but Rashford did at least lay on United's next half chance just after the hour mark, as Ander Herrera directed his left-wing free kick wide of the target.

United certainly enjoyed the greater share of possession in the second period, but chances were difficult to come by.

Lossl was eventually forced into action again 14 minutes from the end, making a big save to push away a Herrera header.

United set up a nervy finish after Rashford latched on to Lukaku's right-wing cross and sent an unstoppable header beyond Lossl.

But it proved to be too little, too late, as Huddersfield dug deep to wrap up all three points and inflict a first Premier League defeat on United since May.