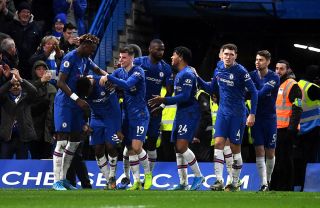 Jorginho set the Blues rolling with a coolly-converted penalty, with Tammy Abraham heading his 13th league goal of the campaign from a stunning Reece James cross.

Hudson-Odoi then slid home the third to cement a vital victory for the Blues and raise hopes the England forward can now strike back to his very best.

The 19-year-old tore his Achilles tendon in the 2-2 draw with Burnley at Stamford Bridge in April, cruelly cutting short his hugely-impressive breakthrough campaign with both club and country.

The Blues’ highly-rated academy graduate fought back ahead of schedule to make a playing return in September, but has been scrapping for top form ever since.

Chelsea boss Frank Lampard has pledged to stand by the England winger, who last season signed a five-year deal to spurn the advances of Bayern Munich and commit his long-term future to the Blues.

Hudson-Odoi had been on the receiving end of social media criticism after a below-par showing in Chelsea’s 2-0 home loss to Southampton on Boxing Day.

But now he has struck twice in two games, with his maiden Premier League goal coming off the back of a morale-boosting finish in last weekend’s 2-0 FA Cup win over Nottingham Forest.

And by the end of this commanding win, Hudson-Odoi was playing with the kind of exuberance that so peppered his progress last term until that nasty Achilles injury.

Chelsea sorely needed this victory having lost successive home league matches to Bournemouth and Southampton across the Christmas period.

Lampard had demanded extra fluidity from his Blues and, after a shaky start they delivered, with their growing confidence in possession pointing the way forward especially for the likes of the impressive James and Hudson-Odoi.

Jeff Hendrick thought he had headed Burnley into the lead, only for Ben Mee to be ruled offside from the free kick that he nodded back across goal.

Suitably reprieved, the Blues then happily ripped open the gift of Matthew Lowton’s poor sliding challenge on Willian in the box to settle those nerves, with Jorginho converting the penalty in style.

The unflappable Italy midfielder wrong-footed Pope in side-footing a spot kick that Willian used all his wiles to earn.

As soon as Chelsea’s Brazil winger spied Lowton naively sliding in he dipped his knee into the challenge and duly – and rightly – won the penalty.

Chelsea’s nerves evaporated and Lampard’s men started to play with something approaching the kind of freedom he would expect from the Blues on home soil.

But just when Burnley thought they could squeeze their hosts, James raced to the byline and whipped in a cross of the highest quality – with Abraham doing the rest.

The England hitman steadied himself and nodded into the net for a smart and deserved finish, albeit amid shambolic goalkeeping from Nick Pope who inexplicably lost sight of the ball.

Chelsea wasted little time extending their lead after the break, with Hudson-Odoi gaining full reward for racing onto Azpilicueta’s cross despite Abraham powering towards a header at the near post.

Abraham missed the whipped cross entirely, but Hudson-Odoi had continued his run anyway – and profited fully by sliding home his first top-flight goal.