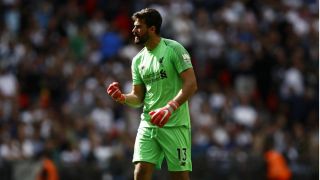 Liverpool goalkeeper Alisson was overcome with emotion about leaving Roma and "cried for a long time" when he realised his time in Italy was over.

Alisson only played a single season as first-choice at Roma, but he impressed so much that Liverpool struck a deal that could be worth almost £67million - a world record for a goalkeeper at the time.

The Brazil international has swiftly established himself as a regular between the posts at Anfield and, although he made an error that led to a goal against Leicester City, he has generally been solid.

But Alisson concedes he had some reluctance about the move, with the 26-year-old so fond of Roma and the Italian capital that he broke down ahead of leaving.

"Leaving Rome was difficult," he told Gazzetta dello Sport. "I cried for a long time, along with my wife.

"It [the decision to leave] was right to be honest. I have made a professional choice, a step forward for my career, and Roma has earned a large sum.

"With my mind, I decided to go to Liverpool, but my heart was still full of tears. I spent two special years in Rome, my daughter was born there, I have many friends there, even out of football.

"So many times I went for a walk around the city. The Trevi Fountain in the dark is moving, a thing of beauty, but my favourite place was the Colosseum. There you breathe history."

Despite finding it difficult to tear himself away from Rome, Alisson highlighted the impact of Jurgen Klopp in persuading him to leave.

"When the clubs got together, Klopp gave me a call on FaceTime and explained his project and what we would do together," Alisson added.

"I've admired him since the days of [Borussia] Dortmund. I like being trained by him, because he does not talk a lot, but he always knows what to say and how to do it. He is an intelligent man of character."