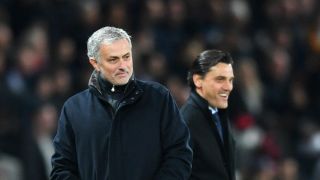 Jose Mourinho claimed early Champions League exits are not "something new" for Manchester United as he knocked the club out twice before taking charge at Old Trafford.

Mourinho has reached the quarter-finals eight times in his managerial career but saw his United side humbled 2-1 on aggregate by Sevilla after substitute Wissam Ben Yedder's brace on Tuesday.

Porto and Real Madrid both knocked out United at Old Trafford under Mourinho's stewardship and the Portuguese was quick to highlight the club's previous failings after their shock exit.

"I don't want to make a drama of it, we don't have time for that," Mourinho told reporters. "We have a match on Saturday [against Brighton and Hove Albion in the FA Cup], we have no time to be sad for more than 24 hours. That's football, it's not the end of the world.

"I sat in this chair twice in the Champions League and I knocked out Manchester United at Old Trafford - with Porto and Real Madrid - so I don't think it's something new for the club.

"I don't think the performance was bad. The intention and the way we started was really good and really positive, then after 10 or 15 minutes of success without goals, Sevilla have a good team they have players who can hide the ball.

"I don't remember a dangerous situation for them, it was a good controlled performance by them without any danger. We had dangerous situations in the first half, a good start in the second half and chances to score. The first goal would always change the direction of the game."

21 - Sevilla attempted 21 shots tonight; the most that Manchester United have allowed an opposition side at Old Trafford in a competitive match since Real Madrid attempted 22 in March 2013 (Champions League). Peppered. March 13, 2018

Vincenzo Montella's decision to send on Ben Yedder for Luis Muriel proved a masterstroke, the striker scoring twice within six minutes of his introduction to settle the tie in spectacular fashion.

In contrast, Mourinho's substitutions had little impact with Paul Pogba, only deemed fit enough for the bench, was unable to wrest control of the contest away from the LaLiga visitors.

"Sometimes I'm lucky with changes and sometimes other managers are lucky with their changes," Mourinho added.

"It was a good, happy move by Vincenzo to bring Ben Yedder and when they scored the first goal it's completely different."

"I don't have regrets. I did my best, the players did their best. We tried, we lost and that's football."

It has been an honour to face such a magnificent club in the . Thank you , we wish you the best of luck for the rest of the season. March 13, 2018

Mourinho has enjoyed large investment in his squad, with huge transfer fees and wages spent to bring the likes of Pogba, Romelu Lukaku and Alexis Sanchez to the club.

But the 55-year-old does not believe further spending would necessarily lead to an upturn in United's fortunes.

"Everybody spends money – it's not just us, right?" Mourinho said.

"It's not just changes for changes sake, it's a natural process."