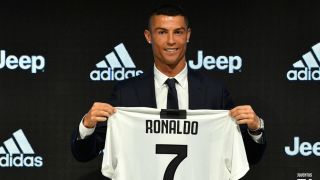 Portugal superstar Ronaldo will sport his favourite number for the Bianconeri next season after winger Juan Cuadrado agreed to switch away from the shirt he has worn for the past two seasons.

Nicknamed 'CR7', Ronaldo made seven his trademark number at Manchester United and later inherited it from Raul at Real Madrid.

But according to Italy international Spinazzola, who has returned to Turin after a two-season loan spell with Atalanta, it was he who graciously made the sacrifice for the 33-year-old.

"My number is seven but when I arrived it was taken by Cuadrado, and now I have let Ronaldo take it," the 25-year-old joked with media on Thursday.

"Six years ago it was impossible to think that Juve would have signed Ronaldo. The club have done an amazing job."

Spinazzola has been brought back to Allianz Stadium as a potential successor to incumbent left-back Alex Sandro, a reported transfer target of Manchester United and Paris Saint-Germain.

However, the former Perugia player is unlikely to feature until mid-October at the earliest as he recuperates from an anterior cruciate ligament injury sustained in May.

Spinazzola: "I've chosen the number 37, which has brought me luck in the past and hopefully it will continue to do so."July 19, 2018