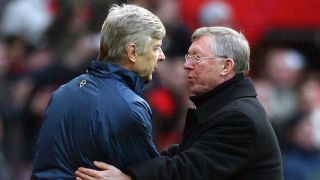 Arsene Wenger hopes Alex Ferguson's "strength and optimistic character" can help the former Manchester United manager in his recovery from a brain haemorrhage.

Ferguson underwent emergency surgery on Saturday, with his old club confirming the procedure was a success but that the 76-year-old would need a period in intensive care.

The Scot had made an appearance at Old Trafford less than a week before falling ill, presenting Wenger with a special gift in recognition of his years of service prior to United's 2-1 win over Arsenal.

Addressing the crowd after his final home game in charge, Wenger sent his best wishes to his long-time rival.

"Firstly, because at Arsenal we care, we would like to wish Alex Ferguson to get well very quickly," he said at the start of his speech.

The Frenchman later added to Sky Sports: "I am concerned because last week we were together.

"I offer just a message of support. I trust his strength and optimistic character to get over it, and well."

The boss has also been discussing Sir Alex…“I was on the pitch with him last week. He was very happy but anything can happen. We wish him all the best and that he recovers quickly. He’s a strong man and an optimistic man, too.”Get well soon, Sir Alex. May 6, 2018

Both sets of players gave the Premier League's longest serving manager a guard of honour prior to kick-off, while he was presented with a mini replica of the competition's trophy - initially given to Arsenal for their undefeated 2003-04 season - after the game.

However, Wenger insisted during the lap of honour he was still coming to terms with his impending departure.

"It's not started to sink in yet. I'm so focused, and as a manager you disconnect from your feelings or ask yourself how you feel," he told Sky Sports.

"You become a bit robotic about just winning the next game and the problems you have. You forget yourself, it will take a bit of time to reconnect and really know how I feel."