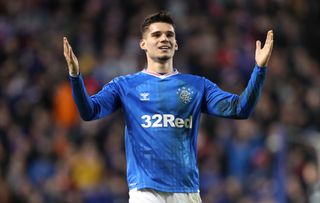 Rangers midfielder Ianis Hagi has set his sights on causing another Europa League shock when they return to action.

Steven Gerrard’s side suffered a 3-1 home defeat against Bayer Leverkusen on March 12 – less than 24 hours before the coronavirus pandemic brought Scottish football to a halt.

Rangers’ second game back is scheduled to be the second leg against a side who returned to action in May and have a German cup final against Bayern Munich to look forward to, as well as an outside chance of a top-four finish in the Bundesliga.

But Hagi is determined to make up for lost time and emulate his heroics from the last 32 of the competition.

Rangers looked down and out as they trailed 2-0 against Braga at home until Hagi netted twice and had a hand in Joe Aribo’s solo goal to turn the tie on its head in the space of 15 minutes.

The Romania international said: “The European games are really special, not just for me but for everyone. Everyone wants to compete at the highest level.

“We have the second leg at Leverkusen and even though we lost the first game, nothing is over in football. Anything can happen.

“We showed everyone when we played at home against Braga, we changed everything in 10 minutes. Playing in Europe is special so we can’t just give up.”

The 21-year-old feels he can hit the ground running when next season starts despite being limited to six weeks of action during his loan spell from Genk.

That was enough to convince the playmaker to commit himself to a permanent move to Ibrox during the summer.

“It helped me to introduce myself in a new league,” he said. “It was different to the ones I had played in before.

“I can say it was easy because I was helped from all points of view. Whenever I missed something or needed something, I always had someone to help me and I always had all the information I needed before training or games.

“The people that work here, my team-mates, the medical staff, the coaches, help everybody. They are so open and it really helped me to integrate really fast.

“Obviously now it will be much better for me and hopefully the season goes until the end and we can finish everything we start.

“I looked for a place where I can feel really good, not only on the pitch but off the pitch.

“I have been happy here and the hunger and mentality the team has really suits me. It’s a really good environment for me.”