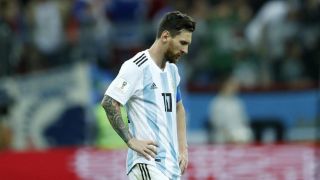 Nigeria must make sure Tuesday's match against Argentina in St Petersburg is Lionel Messi's last at a World Cup, says full-back Brian Idowu.

Argentina's campaign in Russia is veering close to implosion after Messi missed a penalty in their opening 1-1 draw against Iceland and Croatia made the most of an abject display from Jorge Sampaoli's side to run out 3-0 winners, securing safe passage from Group D.

La Albiceleste can only do likewise by beating Nigeria, who lost to Croatia 2-0 but bounced back in style to see off Iceland by the same scoreline.

Reports of a mutinous atmosphere in the Argentina camp have dominated the build-up but, by contrast, Idowu put the Super Eagles' aim in simple, uncomplicated terms.

"That would be our main goal – to make it his last World Cup game," he told a pre-match news conference when asked about possibly bringing down the curtain on Messi's career on the grandest stage.

"As much as we love to watch Messi play, he is playing against us so we only have one option.

"No, we don't think about that. We focus on our game," said the German tactician, who expects experienced midfielder John Obi Mikel to be available despite suffering a broken hand.

Nigeria out training on a glorious early evening in St Petersburg. John Obi Mikel among them with his broken hand strapped upJune 25, 2018

"We have this great player, Messi. Everybody loves him – me personally and all our team.

"The question for us in not whether it is a last World Cup match for him or not; the question is for us to qualify.

"We are not here to watch him play, we are here to get a result. We are professional and we must defend the colours of Nigeria."

"In football, there is no mercy, there is no pity, you must not give any gifts – even if you like this player.

"He did well against Iceland and was unlucky, very unlucky, with the penalty. I think he is in good fitness and we have to be careful with him."

The African nation have been on the losing end in each of their previous four group-stage meetings – the first coming in 1994. Rohr's men won a friendly between the countries in Krasnodar last November, although Messi was absent on that occasion.

This match marks a homecoming for St Petersburg-born Idowu, who has spent his career playing in Russian league football.

"I feel amazing. I saw my parents yesterday and today I met my best friend. I feel the support the people are showing me here," he added.

"I'm excited. Hopefully I'm going to give back to them and the Nigerian fans if I get chance to play tomorrow."