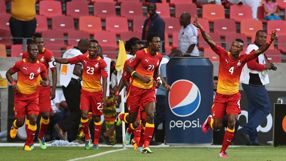 Four-times winners Ghana, who have not won since 1982, took the lead through Asamoah Gyan after six minutes and although Niger had a goal disallowed for an infringement four minutes later they rarely threatened again.

The Black Stars doubled their lead through Christian Atsu after 23 minutes and put the game beyond Niger's grasp when John Boye pounced on a mistake by goalkeeper Kassaly Daouda to make it 3-0 from a metre out four minutes into the second half.

Only some wayward shooting prevented Ghana winning by a far greater scoreline but they did enough to top the group with seven points, while Mali secured second spot on four points after their 1-1 draw against the Democratic Republic of Congo.

Ghana coach Kwesi Appiah was forced into making one change from the side that beat Mali 1-0 in their previous game because Mubarak Wakaso, who scored the winning penalty, was suspended as well as injured.

Atsu took his place at the Nelson Mandela Bay Stadium and had a major impact on the outcome, scoring a wonderfully taken goal when he trapped a cross on his chest, evaded a defender and dinked home a volley from four metres out.

Gyan had earlier put Ghana on top with a powerfully executed angled shot, while the forward also played his part in the third goal when Daouda failed to hold his powerful header and Boye was in the right place to tap in.

Appiah said that despite the scoreline Niger were a good test for Ghana as they seek to end their 31-year Nations Cup title wait.

"We have a new team, a developing team and I would say we are improving. We are halfway there," Appiah told reporters.

"Of course I am delighted we are in the quarter-finals but we now have a very hard match against Cape Verde ahead of us and that will not be easy," he added.

Ghana are likely to find Cape Verde, who finished as runners-up to South Africa in Group A, a far more disciplined and organised opponent on Saturday but on this form they will start as favourites to win that game too.

Niger, who lost all three games on their Africa Cup of Nations debut last year and who picked up their first finals point here after drawing with Congo on Thursday, had made some improvements according to coach Gernot Rohr.

"Of course I am sorry that we are out, but we have time now to improve and at least we got a point, which is better than we did last time," said Rohr.

"I would like to congratulate Ghana. They played very well, I was very impressed with them and for me, well of course they are good enough to win the title."